Qatar 2022: The Permutations, The Calculations and The Possibly Round of 16 fixtures.

81 goals we have seen in 32 games at the Qatar 2022 World Cup. The bigger boys at the tournament, the World Champions France, Brazil and Portugal have found the back of the net seamlessly and have also booked their places in the Round of 16.

The big boys – Argentina, Netherlands, England will be hoping to join the round of 16 party with wins on the final day of group stage matches.

As we start the final matches of the group stage, we take a look at what the Round of 16 might look like after the third games are settled.

In Group A, the Netherlands look certain to top the group but first they have to defeat the host country Qatar who themselves are looking for their first ever World Cup win.

Senegal and Ecuador go head to head in an Africa-South America clash. The Africans need a win to claim their spot in the next round while Ecuador know a draw suits them better.

England, USA and Iran are all still contention in Group B. Wale’s poor goal difference rules them out unless they can score 4 goals without reply against England. Wins for either of England, Iran and USA will determine who finishes where in this group.

In Group C goals will be the decider in the group. All teams have a chance to qualify but determines on how many goals can be scored. Mexico, Argentina, Poland and Saudi Arabia will serve us hot games on the last day.
Australia will be hoping to join France in the round of 16 from Group D but they will need to see off Denmark to achieve that. Tunisia only have a chance if Denmark beats Australia and they beat France by 3 goals.

We might see a big upset in Group E if Germany do not beat Costa Rica on the last day; it means the Germans will crash out of the competition. For Costa Rica, poor goal difference has ruled them out of the competition except Spain beat Japan and they beat Germany. Spain only need a draw against Japan to qualify but the Japanese need a win. Another group to serve blockbuster on final day.

Croatia and Morocco are in charge of Group F. Both teams need only draws to get past. Belgium however need a win but that will be against Croatia.

Brazil have marshaled this group with two wins but Switzerland are right behind them and a draw will see them through. However, battles from Cameroon and Serbia will keep them worried for 90 minutes.

Just like Brazil, Portugal are through in Group H. But Ghana, Uruguay and South Korea still need to battle it out on the last day. 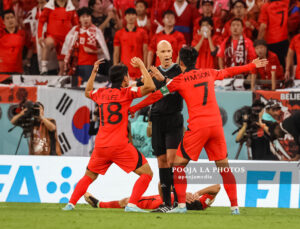 Possible Round of 16 fixtures

The calculators, the prayers hopes and faith will be at work now as fans hope their teams stay longer in Qatar.

My Series 1: No Face Masks As Basic Things Are Very Expensive In Garoua, Cameroon

My Series 2: High Accommodation, Struggle For food, And Covid-19 Tests In Cameroon

My Series 2: High Accommodation, Struggle For food, And Covid-19 Tests In Cameroon

Photos: No Super Eagles in Qatar but the 9ja no dey carry last

Qatar 2022: The Atlas Lions roar and the World vibrates

Photos: No Super Eagles in Qatar but the 9ja no dey carry last

Qatar 2022: The Atlas Lions roar and the World vibrates

No Result
View All Result